Samuel Pepys (1633-1703), probably the most famous diarist in the English language—if not of all time—came to live in the parish of St Olave’s in 1660. At that stage of his life a man of relatively modest means, he moved into one of the houses attached to the Navy Office in Seething Lane following his appointment as Clerk of the Acts.
He rose steadily in his career and in society at large, becoming in due time Secretary to The Admiralty, Master of The Clothworkers’ Company, Master of Trinity House, President of The Royal Society and a Member of Parliament.
Pepys lived in the parish for 14 years from 1660 and called St Olave’s “our own church”. During nine of these years he wrote his Diary, which has passed down to us as an eyewitness account of untold value and importance to our national history, telling how one man lived through times of great political and social upheaval: The Restoration of the Monarchy in 1660, The Great Plague of 1665, The Great Fire of London in 1666 and the Second Anglo-Dutch War of 1667. What perhaps makes the Diary so special and gives it enduring appeal however is that is also a deeply personal account of working life, intrigues and emotional upheavals, as well as of small everyday details. This makes it unique for its time and enables it to endure as a work of literature.

Pepys died quietly in Clapham and his body was brought back to be buried at St Olave’s alongside his wife, Elizabeth, and of one of his brothers, John. Their shared vault lies, as the Parish Register says, “under the Communion Table”.
St Olave’s, which Pepys called “our own church”, is proud of this association and numerous people–of all ages and of many different nationalities–come to visit the church through the year to pay homage to Pepys and deepen their understanding of him and his times. In May each year, as close as we can get to the anniversary of his death on 26th May, St Olave’s holds a Pepys Commemoration Service at 12 noon, at which a distinguished speaker gives an address on some aspect of Pepys’s life. Recent subjects have included: Pepys’s Musical World, Pepys and Trinity House and Pepys and St Paul’s School. The service is organised in association with The Samuel Pepys Club.
There is a beautiful memorial to Elizabeth that Pepys commissioned from the celebrated sculptor, John Bushnell, as well as a 19th-century memorial to Pepys himself that marks the location of the door through which he and his Navy Office colleagues would enter the church to sit in the galleried pew specially built for their use. 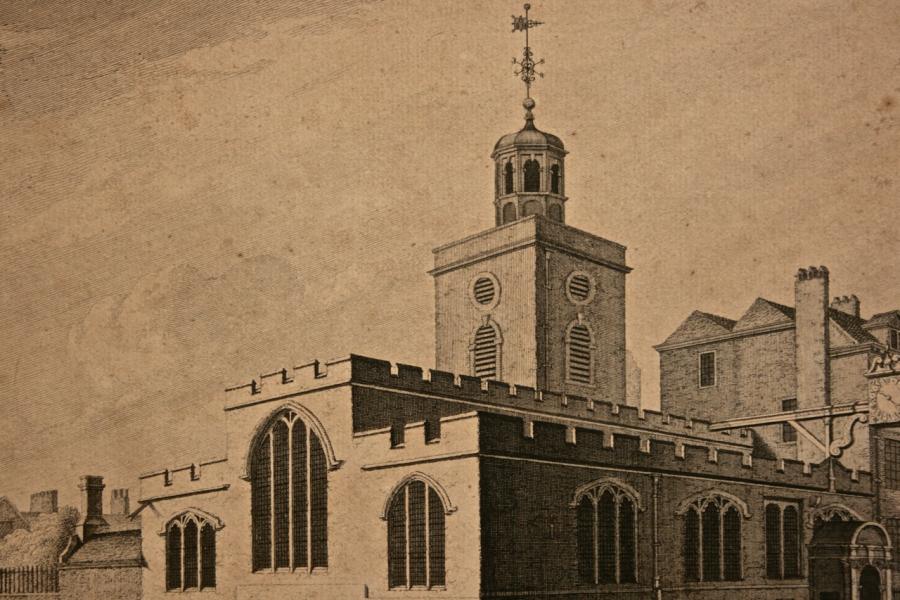